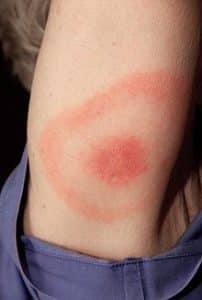 GO OUTSIDEHIKINGNEWSWIR April 2017
Ticks carrying Lyme disease are expected to be rampant on the Appalachian Trail and much of the East coast this summer, says Richard Ostfeld, a disease ecologist at the Cary Institute of Ecosystems in Millbrook, New York, who has studied ticks and their relationship with Lyme disease for 30 years.

The summer of 2015 produced the perfect conditions for oak trees to produce acorns, the main source of food for white-footed-mice that live in Eastern forests. More food for these mice leads to an exploding mouse population. The white-footed mice are the most popular hosts for black-legged ticks, the main carrier of Lyme disease. With more mice, ticks can more easily find a warm body on which to live and later reproduce, passing down the Lyme disease to the nymphs. The nymphs have the highest rate of transmitting the disease because they are incredibly difficult to notice, being about the size of a poppy seed. The black-legged ticks have increased their range by 20 percent from 1998 and are now found in 50 percent of U.S. counties.

According to the Center for Disease Control and Prevention (CDC), there are about 300,000 reported cases of Lyme disease every year. That total does not include the thousands of people who go undiagnosed. Holly Ahern, an associate professor of microbiology at the State University of New York, has studied Lyme disease for seven years. Ahern says that the Lyme disease bloodwork only accurately diagnoses about 50 percent of those who are tested. She estimates the more accurate number of people affected with Lyme disease is closer to 600,000.

Ticks are often found in body crevices and hard-to-reach places such as armpits, groins, and behind the ears. It usually takes 36 to 48 hours to transfer the disease. Lyme disease symptoms include fever, chills, headache, fatigue, muscle and joint aches, and swollen lymph nodes, often confused with a cold or flu by the carrier. The most identifiable symptom of Lyme is a rash in the shape of a bulls-eye found near the bite. According to the CDC, 70-80 percent of people infected with Lyme disease find this mark.

If recognized and treated, Lyme disease can resolve within two to three weeks. However, if gone untreated or undiagnosed, people can experience much more severe symptoms including short-term memory loss, facial palsy, inflammation of the brain, and heart palpitations.

To avoid ticks, your best defense is wearing long sleeves and pants. Tuck in your shirt and your pants into your socks to limit the tick’s access to your skin.