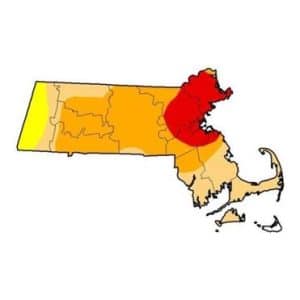 One week after the US Drought Monitor declared an extreme drought for the first time in Massachusetts, it has now extended that area to cover almost the northeastern part of the state.

The area locked in extreme drought includes most of Essex County, all of Suffolk County and Boston, large swaths of Norfolk and Middlesex Counties, and a sliver of Plymouth County, according the US Drought Monitor, a collaboration of government and university authorities.

Before last week, the US Drought Monitor had not declared an extreme drought in Massachusetts since it began producing the weekly maps in 1999, officials said.

Most of Central Massachusetts is in severe drought, the monitor said.

Last week, the state’s Drought Management Task Force recommended issuing a drought warning, the second-most severe declaration in the state’s system, for much of central and eastern Massachusetts.