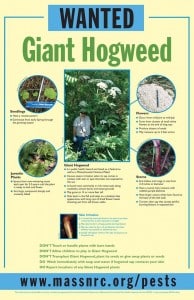 BOSTON (MyFoxBoston.com) — A dangerous plant in bloom in several towns in the Bay State can cause serious burns after exposure.

Massachusetts officials are warning residents of giant hogweed plants, which can cause painful blisters if you touch the plant’s sap and then your skin is exposed to the sun. The plant is found mostly in rich, moist soils near the side of the road, steam banks and waste grounds, officials say, and can grow to be more than 14 feet tall.

A lot of residents are unaware that this plant exists. Stephen Isabelle, who owns Morningside Lawn and Landscape in Whitinsville, only learned about the plant recently after one of his workers was exposed to it in a field.

“I washed it and after a couple weeks, it didn’t go away,” the worker said.

The invasive plant has been reported in 19 Mass. communities since it was first discovered in the state back in 2002. According to the State Department of Agriculture, they are working to get rid of the plants in Acton, Boston, Dover, Groton, and Sutton.