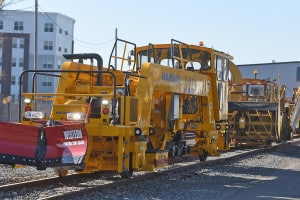 Transit officials are vowing to keep tracks clear and trains running when the snow starts flying, buying millions of dollars worth of new equipment and putting a new snow plan in place to avoid a repeat of last year’s disastrous winter on the commuter rail.

“Last year we were overwhelmed by a number of large storms in a relatively short period of time,” said Frank DePaola, MBTA general manager, at an event yesterday to show off new snow-clearing equipment. “We feel, with this equipment, we’ll be able to manage that volume of winter precipitation and keep our system running.”

The MBTA has bought $8.6 million worth of equipment to clear snow from commuter rail tracks and stations, including small tractors and larger heavy-duty vehicles built specifically to sweep snow off the rails.

That money is coming out of the $83.7 million MBTA winter resiliency budget unveiled by Gov. Charlie Baker earlier this year.

Keolis, the firm that operates the commuter rail, said it created a four-level categorization system, and will mobilize resources accordingly.

The company will also add a new passenger information center and a weather desk, and has started training non-maintenance employees to perform snow-­related duties.

“There’s not a day that goes by that we don’t think about snow,” said Gerald Francis, Keolis’ general manager.

Still, the majority of the most effective equipment — heavy-duty machines called Snow Fighters — are not due to be delivered until mid-December at the earliest.

DePaola said he was “a little bit” worried about snow coming before the Snow Fighters arrive, but said he believes the agency will be able to handle an early storm.

“Normally when we have snowstorms in the November/December timeframes, it’s a single event,” he said.

The Snow Fighters are mammoth, yellow rail-riding beasts with a plow on one end and a snow thrower on the other, along with two other plows that extend out from the sides. The MBTA ordered 10 at a cost of $428,000 each, but only one has been delivered.

The MBTA is hoping to prove it can function during snowstorms after last winter, when snow forced the entire transit system to shut down, stranding passengers.

Already this year, one commuter rail train was canceled after frost and leaves on the rails combined to make tracks too slippery.