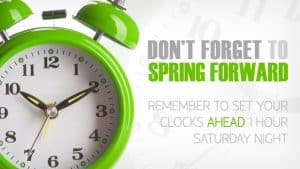 By Craig McCarthy | NJ Advance Media for NJ.com
On Sunday, March 13, 2016, almost all of the United States, and 78 other countries, will set their clocks ahead one hour for Daylight Saving Time.

Every year, DST starts on the second Sunday of March, when our clocks will jump forward an hour at 2 a.m. DST ends on first Sunday of November.

These days, most of the electronics we use as timekeepers — smart phones and watches, cable boxes and even some clocks — will automatically make the correction.

But don’t forget about your oven, microwave or car clock, unless you live in Hawaii or Arizona, the two states that don’t observe the twice-a-year time shift. Indiana was the last state to join in on Daylight Saving Time, just over a decade ago.

And with the extended sunny evening also comes the semi-annual debate over whether the almost 100-year-old practice is outmoded.

Daylight saving started in 1918 after “war time” was established as a way to conserve fuel. It has since been adjusted twice, most recently in 2007 when it was extended by a month due to the Energy Policy Act of 2005.

But does it still work? Citing a study out of Indiana, many have said it actually increases electricity bills due to the demand for air conditioning, which led to a 1 percent increase in overall electricity consumption after 2006 when the state adopted Daylight Saving Time.

However, many favor the practice just because they like the extra light on the tail-end of the day.

Whatever your preference, the fact remains that on March 13, 2016, time will spring ahead one hour in 48 states.

Although 78 countries observe DST, including many European nations, it is not in use in the industrialized nations of Russia, China, India and Japan.