The 2015-16 winter season likely will be remembered by most of the snow and ice industry as a rather lackluster winter with the exception of a single storm.

Despite several areas of hefty snowfall, the global atmospheric weather patterns (typical of strong El Niños, featuring a large upper level trough of low pressure along the West Coast, with a ridge of high pressure dominating much of the central and eastern US) kept the coldest arctic air bottled up in northern Canada near the Arctic Circle during much of the winter. This pattern was responsible for cutting off the supply of cold air necessary to produce normal snowfalls across the United States and lower Canada.

With the exception of a few episodes during the latter half of the winter, the majority of the United States and southern Canada remained unseasonably milder than normal. Overall, the meteorological winter from December 2015 through February 2016 was the warmest on record at 36.8°F (4.6°F above normal) for the US. 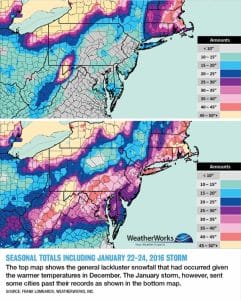 A December to remember
Most notable was December 2015, when temperatures shattered many long-standing records for the warmest December in history. Nearly 500 daily records were broken during the month with areas of New England and southern Quebec running 20° to 30° above normal at times:
Bostonians saw 69°F on Christmas Eve!
In many areas east of the Mississippi, the average temperature was actually warmer than a typical November. The warmth encouraged daffodils to start blooming in the north and even led to some early cherry blossoms in Washington, DC.
During one of the busiest ski weeks of the winter, resorts in northern Vermont struggled to keep snow on the ground as temperatures climbed into the upper 60s.
The Ohio Valley and Mid-Atlantic states saw temperatures top 60°F a dozen times during the month, reaching highs above 70°F on Christmas. The only thing missing in the east was snow.
The big one
Most of the early snowfall during November and December was confined to the Northwest, Rockies and Northern Plains. One of the most memorable events was during the middle of December, when portions of Colorado, Wyoming and South Dakota measured around a foot of snow. But there was one exception. A powerful storm on Nov. 20-21 moved through parts of the Midwest and Great Lakes dropping 10-20 inches of snow in its path. This storm would be the biggest event of the winter across much of the Midwest, accounting for up to 50% of the season’s snowfall.

As the global weather patterns began to shift during the beginning of 2016 and the polar vortex that had kept much of the arctic air locked in northern Canada weakened, a few surges of colder weather moved south into the United States. As a storm began brewing in the southern Appalachians late in January, it captured enough of this cold air to produce the 2016 blizzard that affected much of the Tennessee Valley through extreme southern New England on Jan. 22-24. The 2 to 3 feet of snow that fell affected nearly 103 million people and accounted for more than 75% of the winter’s snowfall in portions of Virginia, Maryland, Pennsylvania and New Jersey. This single event was responsible for pushing season snowfall totals above normal across much of the east. Places like Baltimore, New York City and even Nashville ended up 5 to 15 inches above normal snowfall as a result.

As the overall warm weather pattern returned to much of the continent, snowfall totals were generally below normal for many areas across the US and Canada. Snowfall totals fell short of the seasonal averages by as much as 10 to 30 inches in many areas:
Calgary, Alberta, saw a snowfall deficit of nearly 30 inches.
Buffalo, NY, was even further down with just 55.1 inches of snow (nearly 40 inches below normal snowfall) compared to last year’s 112.9 inches.
Western portions of the country that were quite dry last winter received around or above normal snowfall. Denver in particular received three major late-season storms. One blizzard on March 23, 2016 dropped nearly 2 feet of snow on parts of the city.
Paying the price this season
For the most part, the economy of the snow and ice industry relies on snow and ice events and snow accumulations to survive and be profitable.

In areas where snowfall deficits were substantial, contractors with seasonal contracts that may have fared well this past season may be dealing with some tough negotiations with clients for next season. Although much of the east ended up with near normal snowfall totals, the actual number of events were down considerably, especially the 1- to 2-inch and 2- to 4-inch storms. These smaller storms, along with the subsequent services resulting from melt and refreeze, are important income generators to the snow and ice contractor. To understand the winter, one must evaluate not only the amount of snow that fell but also the number and types of event

What’s ahead for 2016-17 winter?
While it’s still early, WeatherWorks’ long-range forecaster Brian Marmo offered these early thoughts:
While El Niño was a major player in 2015-16, next winter could be impacted by the other phase of ENSO (El Niño Southern Oscillation). Current long-range models favor the transition to La Niña during the second half of 2016. There is still uncertainty as to if and when this will happen, but confidence is growing.
The signature La Niña winter pattern features a ridge of high pressure across the Gulf of Alaska and an upper-level trough over the Northwest and Northern Plains. This promotes colder-than-normal temperatures and more snow in those regions if precipitation occurs. Contrarily, much of the southern US is favored to experience a mild winter.
ENSO is extremely complicated, since the ultimate positioning of the ridge/trough setup depends greatly on the magnitude and location of the sea surface temperature anomalies in the tropical Pacific. For example, an east-based La Niña can shift the trough further east, dropping more cold air across the entire northern tier of the country, increasing the threat of snow to the East Coast.
In the Northeast, ENSO has the lowest correlation with the weather pattern, since it is so far removed from the region. Typically, the Arctic Oscillation has a profound effect on Northeast weather, but this can’t be reliably predicted until October.
Frank Lombardo is president of WeatherWorks, which is celebrating its 30th year in business. Contact him at 908-850-8600 or visit www.weatherworksinc.com.