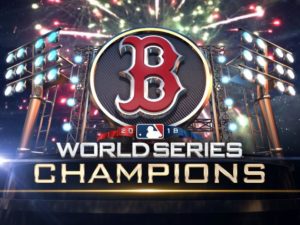 BOSTON (CBS) — For the ninth time in their history and the fourth time since 2004, the Boston Red Sox are champions of the world.

With a 5-1 victory on Sunday night in Los Angeles, the Red Sox eliminated the Dodgers in just five games to win the 2018 World Series.

With the championship now secured, the Red Sox completed what can be considered the very best season in the 118-year franchise history. They set a record with 108 victories during the regular season before embarking on an 11-3 postseason run.

That playoff run saw them recover from a Game 1 loss to the 103-win Houston Astros, with Boston winning four straight games — the final three coming on the road — to eliminate the defending world champions. That ALCS victory came after the Red Sox dispatched the 100-win Yankees in the ALDS in four games.

The Red Sox opened up a 2-0 lead in the World Series with home victories against Los Angeles, before losing a marathon contest in Game 3 — an 18-inning affair in which the Dodgers prevailed, 3-2.

The Red Sox, though, recovered from that deflating loss, rallying from a 4-0 deficit in the seventh inning of Game 4 en route to a 9-6 victory to take a 3-1 series lead.

Facing Dodgers ace Clayton Kershaw in his home ballpark for Game 5, the Red Sox jumped all over him, to the tune of four earned runs over seven innings on seven hits — including three home runs. Kershaw entered this game with a 2-0 record, a 0.60 ERA, and a 0.467 WHIP at home this postseason, but the Red Sox were simply overwhelming on this clinching night.

Steve Pearce — the hero of Game 4 — homered in the first inning of Game 5 to give Boston a 2-0 lead. Mookie Betts and J.D. Martinez hit solo homers in consecutive innings to put the third and fourth runs on the board for Boston. Pearce hit his second home run of the night in the eighth to plate Boston’s fifth run of the game.

Meanwhile David Price, assuming the role of “ace” of Boston’s staff during Chris Sale’s struggles, pitched masterfully. He did allow a solo home run to the first batter he faced, but he then was nearly perfect for the remainder of his outing. Price allowed a single in the second and a triple in the third, which was actually a routine flyball that Martinez couldn’t find in the twilight sky.

After that, though, Price retired 14 consecutive Dodgers batters. He finished the night having allowed just that one run on three hits and two walks over seven innings, all while striking out five batters.

This was a Red Sox team that, really, no matter what it accomplished during the regular season would have to prove itself in the postseason. Sure, they could set a franchise record for wins, they could be on pace of flirting with the all-time record for wins, but it was a down year across MLB. Too many bad teams. Check their record against playoff teams, the critics said every day. They’re an average team against real opponents. Life will get a whole lot harder for first-year manager Alex Cora once the calendar flips to October.

There will be no more debate. The Red Sox are the best team in baseball in 2018, and they’ll go down as one of the best teams of all time — both in franchise history and in the history of Major League Baseball