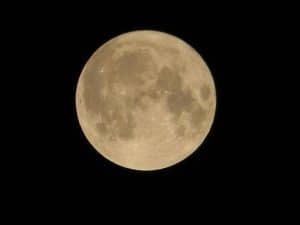 Supermoon Over Massachusetts Tonight Will Be Biggest In Nearly 70 Years
What’s a supermoon? Why is this one so big? Here’s what you need to know.

By Mike Carraggi (Patch National Staff) – November 14, 2016 11:42 am ET
Supermoon Over Massachusetts Tonight Will Be Biggest In Nearly 70 Years
If you take a look at the moon Monday, Nov. 14, you may notice that it appears bigger and brighter than usual as it hangs in the sky.

That’s not just your brain playing tricks on you. In fact, scientists say, it’s the biggest the moon will have looked in nearly 70 years.

But Monday’s will be the biggest supermoon since 1948, according to Bob Berman, an astronomer at the Slooh Community Observatory. And NASA says the moon won’t be this big again until 2034.

Here’s what you need to know.

What is a supermoon?
The moon’s orbit around Earth isn’t a perfect circle. It’s more oval- or egg-shaped, meaning the moon is continuously getting closer or farther away from us.

The moon’s closest point to Earth is called “perigee,” which is about 30,000 miles closer than the opposite, “apogee.” When perigee lines up with the cycle of a full moon, it’s known as a supermoon.

Supermoons can appear to be about 14 percent bigger in the sky and 30 percent brighter.

But the exact moments of a full moon and perigee hardly ever line up simultaneously. So the supermoons can vary slightly in size.

Which brings us to this month…

What makes November’s supermoon so special?
This month’s moon is going to be even super-er.

According to NASA, the moon will become “full within about two hours of perigee—arguably making it an extra-super moon.” And the moon won’t look this big until again until Nov. 25, 2034.

Bonus fact: the November full moon is traditionally known as the “beaver moon,” being when hunters would go after the critters as they built their dams.

How can I see it?
Just look up!

There’s nothing fancy about looking at a supermoon. No special equipment is required.

You should check your local weather forecast, though, for rain and clouds. Overcast skies can diminish the moon’s brightness significantly, and clouds are possible in the area tonight.

If you miss it, don’t worry. You’ll only have to wait 18 more years.