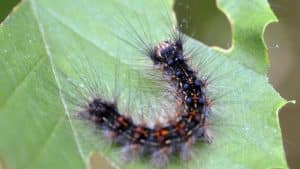 In this June 1, 2016 photo, a gypsy moth caterpillar crawls on a leaf in Plainfield, Conn. Last year’s dry spring, coupled with the recent stretch of dry weather, is being blamed for the resurgence of the caterpillar across parts of southern New England. Scientists said this year’s crop is one of the largest since the 80s. (Aaron Flaum/NorwichBulletin.com via AP)

By SUSAN HAIGH AP, July 3, 2016
. (AP) — Last year’s dry spring, coupled with the recent stretch of dry weather, has helped to fuel the resurgence across parts of southern New England of the gypsy moth caterpillar, a furry nuisance blamed for defoliating an estimated 9 million acres from Maine to Maryland back in 1981.

Scientists say this year’s crop of caterpillars is one of the largest they’ve seen since the ’80s. The critters are being blamed for stripping foliage from thousands of acres of trees in pockets across the region, often leaving behind barren branches. Some warn next year could be even worse, considering there’s been no significant wet weather in recent weeks to spark a fungus that has proven in past years to be a successful gypsy moth predator.

“I suspect we’re going to be facing a real issue next year,” said Kirby C. Stafford III, Connecticut’s chief scientist and state entomologist. While oaks and other trees can often withstand a single defoliation, Stafford warned that after “getting slammed two years in row, we’ll probably see a lot of tree mortality” next year.

In 2015, the gypsy moth caterpillar was blamed for munching away more than 175,000 acres in Connecticut alone, marking the first major outbreak in years. Stafford said he expects this year’s defoliation will be much worse, adding that he’s received reports from the northeastern part of the state of caterpillars feasting on spruce and conifers. Aerial surveys of this year’s damage are planned soon.

Farther north in New Hampshire, however, state forestry experts said this month they’ve received reports of high numbers of gypsy moth and forest tent caterpillars, but no defoliation. They predicted rain would activate several predators, such as the fungus, and keep the caterpillars in check, posing little threat to trees.

David Hanson, who runs a family farm in Bridgewater, Massachusetts, and sells everything from eggs to firewood, said this year’s devastation in parts of his state reminds him of the gypsy moth assaults in the late 1980s, when many trees ultimately died. While the damage is not noticeable in some locations, he described areas where there isn’t a single leaf on a tree.

Hanson couldn’t see the blacktop on a road behind his farm because it was covered with bits of leaves left behind by the caterpillars.

“It’s almost like you have to rake your lawn now,” he said. “Some people are telling me they’re raking their lawn because there’s so much leaf litter on them from the gypsy moth damage.”

In Rhode Island, the state’s Department Environmental Management recently issued a public warning about the increased risk of forest fires due to the defoliation. State officials urged residents to avoiding sparking a fire while cooking outside, building a campfire or using fireworks. Meanwhile, one Rhode Island allergist warned how the little hairs on the caterpillars can stick into people’s skin and cause a “histamine-type reaction” that could last for days or weeks.

This year’s onslaught of caterpillars should end soon. They complete their feeding during late June to early July and then seek a place to pupate. They’ll then transform into a moth in about 10 to 14 days. Females will lay one egg mass and then die.

Stafford said those hard egg masses can be found anywhere, including on vehicles and outdoor furniture. While homeowners can drown the egg masses in soapy water, he said many are located high up in the trees and may require a professional arborist next spring.