The lunar orb rising on Thursday night marks the closest full moon to the fall equinox. Here’s why that matters. 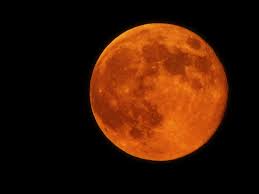 For sky-watchers in the Northern Hemisphere, the October full moon is pulling off a celestial trick that will be a real treat.

On Thursday night, the sky will be aglow with this year’s harvest moon—the first time a full moon bearing this moniker has fallen in October since 2009. Technically, the moon reaches its full phase on October 5 at 2:40 p.m. ET, which means the harvest moon will be in effect when the lunar orb glides above the horizon at 7:21 p.m. ET.

So why do we call this spectacle a harvest moon, and why is it special?

Civilizations around the world have long used the phases of the moon to keep track of time, and according to lunar tradition, each month’s full moon gets a special name. These names vary by location and regional folklore, but many are based on that particular full moon’s seasonal characteristics.

While it’s been a while since we last saw an October harvest moon, the phenomenon isn’t really that rare, says Ernie Wright, a specialist at the NASA Goddard Space Flight Center’s Scientific Visualization Studio in Maryland.

“The previous one was in 2009, but the one before that was 2006, and the next one will be in 2020,” he says. Based on the timing of the equinox and the regular 29.5-day cycle of the moon, a harvest moon can happen on any date between September 7 and October 8. That means the probability of an October harvest moon is roughly one in four, he calculates.

LIGHTING UP THE NIGHT
Still, any given harvest moon can be a beautiful sight, thanks to the moon’s behavior in the autumn months.

The moon’s orbital path is slightly tilted with respect to Earth’s orbit, so the lunar disk changes its position in the sky with each moonrise. Over the course of a year, the moon pops above the horizon about 50 minutes later each day, on average.

But for several days in a row around the fall equinox, the moon rises only about 30 minutes later in the northern U.S. and just 10 to 20 minutes later in much of Canada and Europe. It sounds like a small shift, but it brings noticeably brighter nights: During this time, the full moon rises almost as soon as the sun sets, first appearing as a plump, orange-colored orb right around dusk. (Find out more about the moon illusion and why the moon always looks bigger near the horizon.)

Gravitational Waves Won the Physics Nobel Prize—Here’s Why
Uranus at Its Best, and More Can’t-Miss Sky Events in October
Why T. Rex’s Puny Arms Are a Sign of Strength
With little darkness between sunset and moonrise, farmers can work later into the night harvesting crops—the likely origin of this full moon’s name. According to a monthly email about the moon sent by NASA’s Gordon Johnston, the name “harvest moon” hails from Europe, where it’s been used since at least the early 1700s. It’s also been called the travel moon, dying grass moon, or blood moon in various Native American traditions.

This year, the October 5 full moon also heralds Sharad Purnima in India, a Hindu harvest festival held around the first full moon in the lunar month of Ashwin, which marks the end of monsoon season.

“The harvest moon is a full moon, but not one that really provides any specific unique-viewing opportunity—other than that you might have great observing from a pumpkin patch,” says Andrea Jones, the Lunar Reconnaissance Orbiter public engagement lead at NASA.

She adds that NASA will be celebrating this year’s International Observe the Moon Night on October 28, when our cosmic companion will be in its first quarter phase and only half-lit.

“We encourage everyone everywhere around the world to look up at the moon that day and take the opportunity to learn about and celebrate lunar and planetary science, exploration, and the personal and cultural connections we all have to our nearest neighbor in space,” Jones says.